Day of the Dead Altars 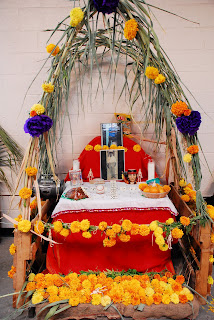 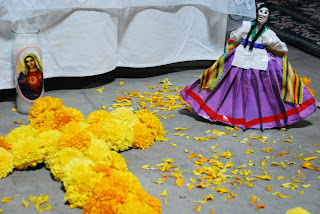 El Paso's Mercado Mayapan invites the public view community-made Dia de los Muertos altars at their faciility today and tomorrow from 3-10 pm.  This year's celebration will highlight the state of Chiapas and will offer traditional food and dance.

Mercado Mayapan Festival Market Place
2101 Myrtle
El Paso, TX 79901
From the El Paso CVB's website, http://www.visitelpaso.com/ "The origins of Día de los Muertos in Mexico can be traced back to the indigenous peoples such as the Aztec, Maya, P'urhépecha, Nahua, and Totonac. Rituals celebrating the deaths of ancestors were observed by these civilizations for perhaps as long as 3000 years. In the pre-Hispanic era, it was common to keep skulls as trophies and display them during the rituals to symbolize death and rebirth.


The festival that became the modern Day of the Dead fell in the ninth month of the Aztec calendar, about the beginning of August, and was celebrated for an entire month. The festivities were dedicated to the goddess Mictecacihuatl, known as the "Lady of the Dead", corresponding to the modern Catrina.

In most regions of Mexico November 1 honors deceased children and infants, whereas deceased adults are honored on November 2. Death, to a certain extent, is celebrated as a special occasion. Elements like water, earth, fire and air as symbols as the soul is passed from one life to another. Plans for the festival are made throughout the year, including gathering of goods to be offered to the dead. During the period of October 31 to November 2, families usually clean and decorate the graves. Most visit the cemeteries where their loved ones are buried and decorate their graves with ofrendas, or offerings, which often include orange marigold called "cempasuchil", originally named cempaxochitl. In modern Mexico, this name is often replaced with the term Flor de Muerto, Spanish for "Flower of the Dead." These flowers are thought to attract souls of the dead to the offerings.

Toys are brought for dead children (los angelitos, or little angels), and bottles of tequila, mezcal, pulque or sotol for adults. Families will also offer trinkets or the deceased's favorite candies. Ofrendas are also put in homes, usually with foods such as candied pumpkin, pan de muerto (bread of the dead) or sugar skulls and beverages such as atole. The ofrendas are left out in the homes as a welcoming gesture for the deceased. The pillows and blankets are left out so that the deceased can rest after their long journey. In some parts of Mexico, such as the towns of Mixquic, Pátzcuaro and Janitzio, people spend all night beside the graves of their relatives.

Some families build altars or small shrines in their homes. These altars usually have the Christian cross, statues or pictures of the Blessed Virgin Mary, pictures of deceased relatives and other persons, and scores of candles. Traditionally, families spend some time around the altar praying and telling anecdotes about the deceased. In some locations, celebrants wear shells on their clothing so when they dance the dead will wake up because of the noise. Some will dress up as the deceased.

Public schools at all levels build altars with offerings, often omitting the religious symbols. Government offices also usually have at least a small altar, as this holiday is seen as important to the Mexican heritage.

Those with writing talent sometimes create short poems, called calaveras (skulls), mocking epitaphs of friends. This custom originated in the 18th-19th century, after a newspaper published a poem narrating a dream of a cemetery in the future, proceeding to present the epitaphs on the tombstones. Newspapers dedicate calaveras to public figures, with cartoons of skeletons in the style of José Guadalupe Posada. Theatrical presentations of Don Juan Tenorio by José Zorrilla are also traditional on this day.

A common symbol of the holiday is the skull (calavera), which celebrants represent in masks, called calacas (skeletons), and foods such as sugar skulls, which are inscribed with the name of the recipient on the forehead. Sugar skulls are gifts that can be given to both the living and the dead. Other holiday foods include pan de muerto, a sweet egg bread made in various shapes, from plain rounds to skulls and rabbits often decorated with white frosting to look like twisted bones.

The traditions and activities that take place in celebration of perhaps are not universal and often vary from town to town. For example, in the town of Pátzcuaro on the Lago de Pátzcuaro in Michoacán, the tradition is very different if the deceased is a child rather than an adult. On November 1 of the year after a child's death, the godparents set a table in the parents' home with sweets, fruits, pan de muerto, a cross, a Rosary (used to ask the Virgin Mary to pray for them) and candles. This is meant to celebrate the child’s life, in respect and appreciation for the parents. There is also dancing with colorful costumes, often with skull-shaped masks and devil masks in the plaza or garden of the town. At midnight on November 2, the people light candles and ride winged boats called mariposas (butterflies) to Janitzio, an island in the middle of the lake where there is a cemetery, to honor and celebrate the lives of the dead there.

In contrast, the town of Ocotepec, north of Cuernavaca in the State of Morelos opens its doors to visitors in exchange for 'veladoras' (small wax candles) to show respect for the recently dead. In return, the visitors receive tamales and atole. This is only done by the owners of the house where somebody in the household has died in the previous year. Many people of the surrounding areas arrive early to eat for free and enjoy the elaborate altars set up to receive the visitors from 'Mictlán.

In some parts of the country, children in costumes roam the streets, asking passersby for a calaverita, a small gift of money.

Celebrations of the holiday are growing steadily across the United States, adopting ancient traditions and creating new rituals. Día de los Muertos is quickly becoming an international event."
Posted by Unknown at 8:13 AM

Email ThisBlogThis!Share to TwitterShare to FacebookShare to Pinterest
Labels: Day of the Dead, El Paso