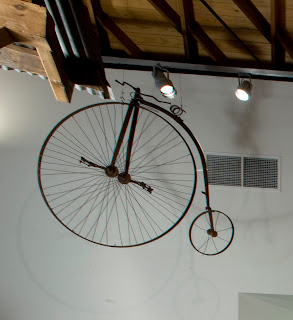 There's a GREAT story hanging aloft the main exhibition hall of the Museum of the Big Bend in Alpine.  The Museum's Historian/Curator, Matt Walter, tells us:

"In 1892, F. P. INGERSON rode that bicycle from Sycamore, Ohio, out to Barstow, Texas. There, he married a Miss Carson, a schoolteacher in Pecos, TX. She is the one who donated the bicycle to the museum, in 1938. It’s an EXPERT COLUMBIA, made by the POPE MANUFACTURING COMPANY of Boston, MA. These bicycles were nicknamed “Pennyfarthings” because of the size difference between two English coins, the penny and the farthing."

Mapquest tellls us that's a journey of 1,500 miles...in a car, they estimate it would take 23 hours today.  What do you think the journey was like for Mr. Ingerson?  We understand that since he was a carpenter, he carried his tools on his bike, so he could work with him for his journey....that would have been quite the load!

Our thanks to Matt and to the entire staff of the Museum of the Big Bend, who are terrific friends and supporters of our Texas Mountain Trail organization.  The Museum is one of the best small museums you'll find anywhere.  Plan a trip there soon!
Posted by Unknown at 7:48 AM