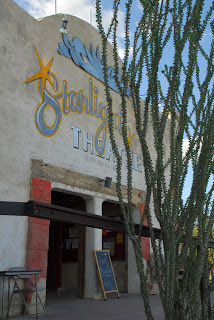 When we head down to Big Bend National Park, we try to work in dinner at the Starlight Theatre in Terlingua Ghost Town.  The building was the performance hall for this mining community in the 1930s, the Starlight now has a fine menu and often live music and performances.
From our Texas Mountain Trail website, on Terlingua:

"Originally a small Mexican village on the banks of Terlingua Creek three miles above the creek’s confluence with the Rio Grande River, Terlingua changed rather quickly in the late 1800s due to the discovery of quicksilver. Quicksilver, or mercury, is a rare element occurring in the Earth’s crust and may be derived rather simply by heating its host ore – cinnabar. Quicksilver often occurs in environments once highly volatile like the volcanic country comprising the mountains around Terlingua. Its use was at one time particularly prevalent in medical and scientific instrumentation, making its Terlingua source the conduit to prosperity for this community during the early part of the 1900s. 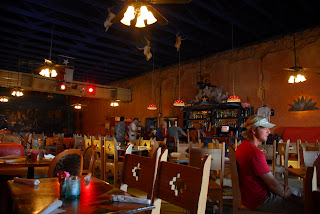 The Chisos Mining Company provided employment for hundreds of mine workers, many who occupied the simple, stacked rock structures that still stand in the Terlingua area today. Quicksilver mining peaked by the end of World War I but it didn’t spell the end for this desert community. Today, much of the original buildings are filled with saloons, eateries, and small shops and many of the tiny rock structures have been restored and stabilized and serve as private residences for Big Bend’s desert dwellers. The entire collection of structures and ruins constitutes the town’s own historic district, earning it a National Register listing. Outdoor outfitters, specializing in mountain biking and river rafting, dominate the community character and the annual Terlingua Chili Cook-off, a not-to-be-missed pilgrimage for many Texans each November, never fails to raise a crowd."
﻿
How to get there?  Head west from Terlingua/Study Butte (those two towns are intertwined so much it is hard to tell where one ends and the other begins) on the River Road, Hwy 170.  About five miles west of the intersection of Hwys 170 and 118, turn right at the sign for the Ghost Town.  Here's a map from our friends at Visit Big Bend, with a list of businesses in the area.

We send thanks to our friends at Stonewear Designs for letting us try out some of their activewear, which doubles as terrific travel clothes...perfect for relaxed destinations, such as Terlingua!
Posted by Unknown at 8:22 AM