A gracious way to travel...step off the train...and the best of the city is steps away 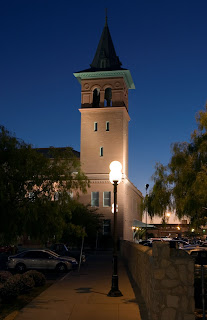 One of the loveliest and gracious ways to travel to the region is by train, through El Paso's Union Station.  Built in 1905 and renovated in 1982 (and on the National Register of Historic Places), the station was the first passenger station built in the United States specifically for international travel.  The county's website outlines the renovation work that was done to bring the station back to its original glory:

"The original tile floor was installed, the white paint on the outside bricks was removed, most of the original woodwork was preserved as much as possible, marble was imported from Italy to replace the damaged marble on the inside columns, and the tower and steeple were restored to their former place on top of the Depot."  To read more, click here.

Today, Amtrak's Sunset Limited runs through our region on its route from New Orleans to Los Angeles.  El Paso is a fully supported stop (meaning you can check luggage and bicycles!) on the route, and one of two stops in our region.  (Alpine is the second.)  Within walking distance is one of the hotels participating in our Texas Mountain Trail cycle-friendly program is the Holiday Inn Central El Paso.

The station is centered in the historic downtown, near the city's museum campus.  Consider visiting the city's Museum of History and Museum of Art.  Or the Insights Science Museum, or the Lynx Exhibits.  Since you've arrived by train, there's a place of special interest, El Paso's Railroad and Transportation Museum!
Posted by Unknown at 8:13 AM