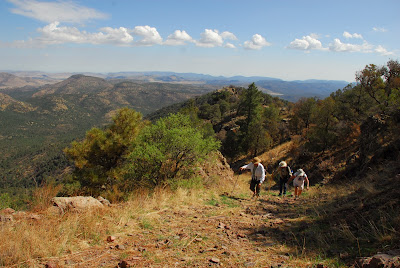 In the next few days, we're sharing photos of Mount Livermore in the Davis Mountains, with selections of a 1914 journal by University of Texas botany professor, Mary Sophie Young (1872-1919).

"It was a fine morning and we started on our trip at about 9 o'clock, with one canteen, two napsacks, and the botany can.  The first part was in the level through the canyon, but soon we began to climb and there the road changed to a trail.  It was a good deal like the Montana trails, except that they were through the open, or oak woods, instead of pine, fir, and spruce, and there was no mud."


"The mountains and canyons are very pretty--of course everything is on a small scale.  The mountains are pretty well wooded--oak on the summits and pretty well down.  A sprinkling of cedar and pine beginning on the high slopes and increasing toward the bottoms of the canyons where, in the high, moist valleys, they form the dominant part of the tree vegetation.  The trail is cut out of the side of the mountain, so one gets a good view.  In places it zigzags back and forth and once or twice goes down for some distance, then up, but most of the time it was a steady climb."

"We were homesick for our house that night.  If it had not been so late we would have come on home, but when I thought of leading Nebuchadnezzar (a mule) through the creek fifty-seven times in the dark, my courage gve out.  So we stayed another night.  It threatened rain some, but the morning was fair......"

Would you like to visit Mount Livermore?  We're waiting for The Nature Conservancy to post their Open Days for 2012 when the Davis Mountains Preserve (and Mount Livermore) is open to visitors.  Check our Texas Mountain Trail web calendar for events in the region!
Posted by Unknown at 10:12 AM